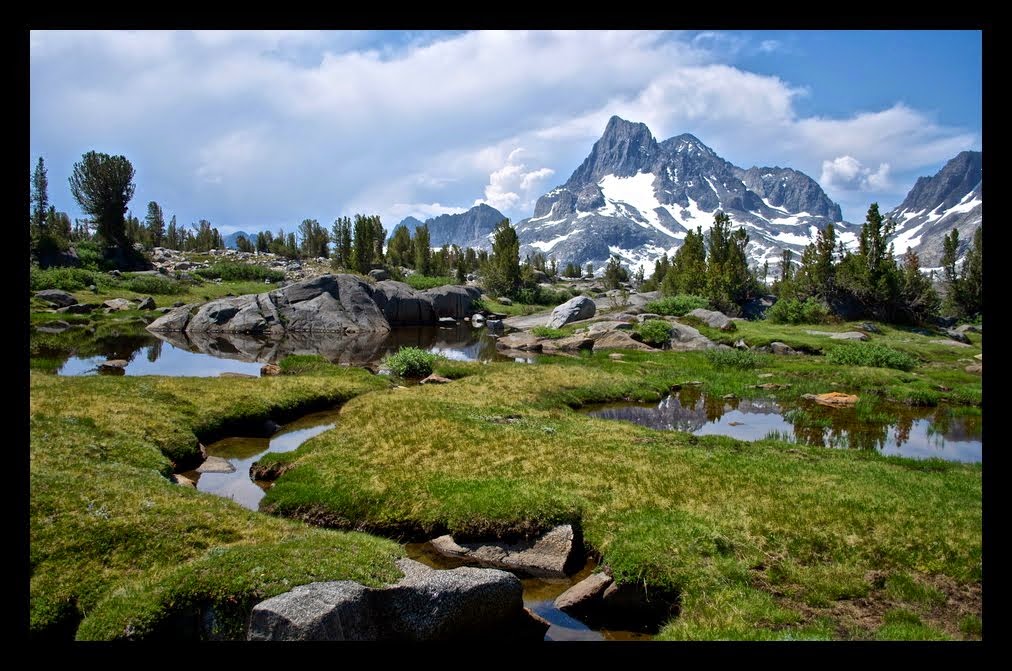 It was cold in the Sierra meadow. Dottie was bundled and squatting low in the bunch grass; no trees growing in this water shed. Watching the western sun slide below the high peaks of the central Sierra Nevada, she was glad it was Marcy's turn to make dinner tonight. Strolling off to find some privacy, not a hard task in this desolate region of the lovely Sierra range, she was reminded that at 10,000 feet, the thin air cooled quickly when the sun slipped below the western horizon. The huge ridge to the east, a moment ago lit with the last rays of the setting sun, glowed red with black streaks. As the shadows descended along the face of the ridge, the cliffs moved from vivid red to bleak brown to black. So quickly, she thought. The day changes with the light so quickly.

The colours of the mountains were part of the reason she backpacked here. The contrast between the vivid minerals and the greens of the forests, the grey of the sage meadows, the Irish greens of the softer lower meadows with new bunch grass growing like velvet quilts embroidered with tiny mountain flowers lasting only a couple of days before fading in the cold nights.

This cold was the reason she was determined that when they got home she was going to find a male partner to join them in their weeklong sojourns into the mountains near Bishop, in eastern California.

She loved trekking with Marcy who was the best travel partner one could imagine. She carried her own load; she was never spooked by lost trails or difficult terrain. She was a tad slow on the uphill, but a mountain goat on the descent. Dottie could never keep up with her on the way out.

They were headed for Lake Dorothy this trip. Tomorrow, they would snake up the trail along the western face of the valley to the hanging lake on slippery slabs of granite. Dottie hated slick granite. Two steps forward, one step back as the slag slipped down the hill, disturbed by the hikers' boots.

She wandered along the meandering stream that moved through the valley and headed back to the camp where Marcy was boiling water for their soup. They would have tea, soup, a trail mix bar, an aspirin, and head off to bed.

"Marsce, what do you think about getting some guys to join us next trip?", she suggested as she sat on the downed log to reach for her Sierra cup full of warm soup.

"Ya, know, we have tried. I asked Tony to join us. You asked Paul. These guys just don't seem to want to go the places we go, Dottie."

"They just don't want to move at our speed."

"Yeah, I suppose. Seems like we are just not in the same groove as they are. If we don't climb, our destination is not hard enough for most of em, is it?"

Marcy and Dottie had been taking at least one trip a year into the Sierra for the past five years. They had covered a good deal of the John Muir Trail, Evolution Valley, Mt. Whitney, Golden Trout Wilderness, Yosemite high lands, Devil's Post Pile, Red's Meadow, Desolation Wilderness, and Piute Pass. In snow and in dry years they had enjoyed Bishop Pass and the upper reaches of the Kearn. They had taken their time,

They left their hubbies at home for a variety of reasons and just headed out on their own, keeping their own pace, enjoying the butterflies, the birds that greeted them at dawn and sunset around campsites each day. Marcy always brought her fly fishing rod in its aluminium rolled canister, and so their dinner soup was often complimented by a fine Sierra brown trout or two.

Life was good, but as is often the case, they both liked the idea of some male conversation and companionship in this pristine wilderness.

"Ya, know, Marsce, I'm gonna put an ad on a website to see if we can score some male company on our next trip."

"Yeah, sure! I can just see it now. You be careful. No way to know about folks you meet on the web. I've heard some stories."

"There has to be a way. I'll check out some of the backpacking message boards."

They finished their soup, poured the hot pumped water onto their teabags, and waited for the aluminium cups to cool off so they could sip their camomile.

"Cold tonight, " Dottie said as she clapped her gloved hands. "Glad there's so little breeze. You gonna sleep in the tent or in your bivvy?"

The bivvy bag was new, a cocoon inside of which Marcy stuffed her mummy bag and her boots before she crawled in, zipped up and snuggled with her down jacket pillow off to sleep until the stars of the late August Perseids began to fall through the pristine Sierra night sky.

Dottie finished her tea, rinsed out her cup with a slosh of water, rummaged through her backpack stuff bag, pulled out her toothbrush and a tiny travel toothpaste, turned around, brushed her teeth, spit into the darkness away from the flashlight that was their only light until the stars came out in full force. No moonlight tonight. They had arranged their trip to avoid the moon. The shooting stars of the Perseids would be in full bloom this night with no competing moonlight to drown out their brilliance.

Cleaning up camp is a big deal in the Sierra. "Think we will have any visitors tonight? " Dottie asked as she stuffed all the food they were carrying and all of her cosmetics inside one of the two bear canisters they brought along. Five pounds of canister was an inconvenience, but not so great an inconvenience as losing all their food to a rummaging bear in the middle of the night.

She tightened the round canister top and rolled it over to a depression in the meadow about 20 yards from her tent. She picked up Marcy's now full canister and did the same. There the two black drums sat by themselves, hopefully to lie undisturbed til dawn.

"Ok,d. Call me when things get busy. I'll come outside and watch for a while. Dottie bends down, unties her hiking boots, steps out of them gingerly over the zipper opening of her two-man tent, turns around once inside to pick up her boots, banging the bottoms together outside to knock off any excess meadow soil. Bending down, she tucks herself into the tiny space, strips to her long johns and sports bra, and slides into her big blue mummy bag. Tucking her down-jacket bunched up beneath her head, she rolls until all of her is on the air mattress beneath. Snug, she closes her eyes and gives her muscles some needed attention. Her lower back groans after a ten-mile day of uphill with a 35-pound pack. Her knees seem ok. They will complain later, she figures. Her shoulders are a tad tender.

The altitude means dry air. Far better than rain. Even though there will be no rain tonight, hopefully, she has covered her backpack, which she left standing outside her tent with a huge heavy-duty plastic trash bag to keep the dew from soaking the entire pack.

As she snuggles into her comfy space, she hears the recorder. Marcy has brought the black plastic flute with her. A lovely, lonely sound, the recorder echoes in the valley. Tears wet Dottie's eyes. Oh, how she wishes there were someone she loved here to snuggle with on this lovely cold mountain night.

As Marcy brings the tune to an end with Taps, Dottie begins a solo clapping. "Thanks, Marcy, delightful addition. " A deep sigh escapes. "You re the bestest. You think of everything."

"Night, Dottie. Sleep well. I'll call you when I see the first of the Perseids."

Already dozing, Dottie mumbles." sure, thanks." As she slides into a deep sleep, her last thoughts are, "I'm gonna find a guy to enjoy this with me."
Posted by Dorothy Shamah at 1:27 PM No comments:

I haven't forgotten you all, just been a tad busy with the real world..of which, of course, you are an integral part.

Traveling to the subtropical rain forest of Lamington National Park for three days took up most of last week. Lovely clear weather kept tracks dry as we hiked to the headwaters of the Coomera River. WE crossed the creek.. that eventually is the River at Nerang.. five or six times on stepping stones..enjoyed the leechless afternoon and ended up walking about 18 kilometers.

Absolutely lovely! We were the only residents of the tent cabins at Binna Burra which means that we alone were the entertainment for the Brush Turkeys, the BrushTailed Possum, and the little grey and white field mouse who came to visit.

Loved the morning Whip Bird and his/her mate..one of my favorite indigenous songsters..

Today I have begun work on my book!! better known as Das Book..although the only German word in it will be kindgergarten with maybe one or two gemutlichkites thrown in for good measure.

I have discovered that my journals, notes, and emails for the past four years have produced more than a thousand pages of 10 point Geneva. And here you thought I only 'talked' too much! :)

I'm a tad surprised that I'm not a carpal tunnel syndrome sufferer with all these words raptly keyboarded onto my computer screen!

I will share some of the better moments I manage to cull from the dross...

Hope you are all well..Autumn in Oz is absolutely amazing..the midges and I send you greetings..theirs are dripping with just a smigeon of blood taken from my forearm..My greetings, however, are not tainted!
Posted by Dorothy Shamah at 3:26 PM No comments: 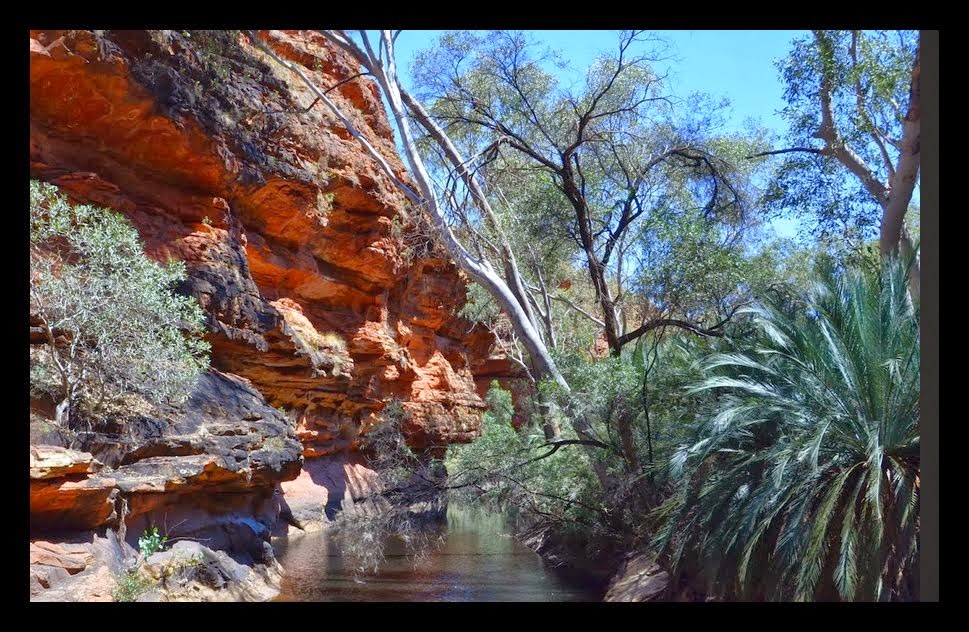 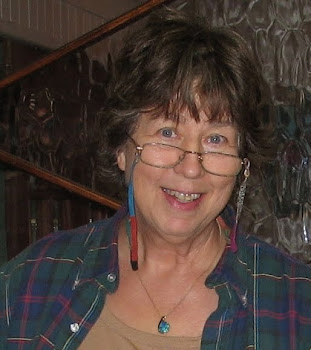 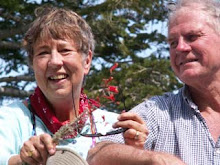 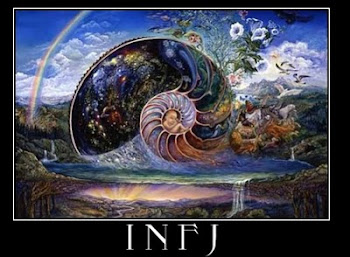 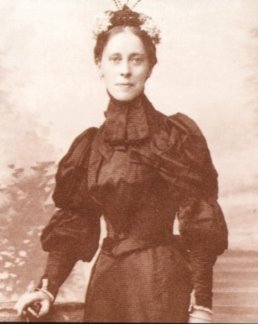